Hey Ho, if it did not rain what would we have to talk about? when we can meet and talk that is.

I have to say that I am making the most of both the weather and the lockdown. 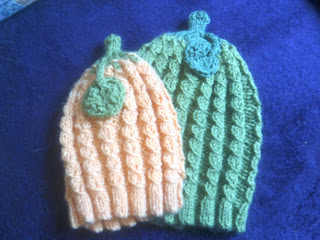 These are the first of a family of 4, the pattern is the pumpkin beanie on ravelry.
I added the leaf, I crocheted it from an old pattern.
Once the other 2 are finished they will be gifted and then my sister would like one. 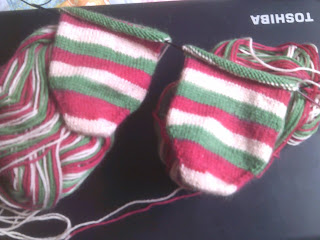 This yarn has been lingering for ages in my stash, I had 4 skeins and have knitted several pairs of socks. This pair will be the last, hopefully as I am rather tired of it. I can not remember where it came from or the brand, it is hard wearing and softens with washing.
I am still not loving this new blogger.
Rolls eyes and grimaces.
I have found a new podcast to watch, Knit365 blog, Martin produces a round up blog at the end of the month and slips in an extra project one every now and then. His style is laid back and has no extraneous content, I like it. He is about to start the new West mkal and I look forward to seing his progress.
Just before I lost Ben I bought new coats for him and Herbie. I don't know whether I could not measure them or if I just made a mistake with the order but one fitted Herbie and the other one would have got both of them in with wriggle room. Anyhow, the larger one was tucked on a shelf and left, this afternoon one of my neighbours called me as I was walking past and asked if I could make a coat for his dog. I have met the dog and knew instantly that the large coat would fit him. It was perfect so I have gained a smidgeon more space and Kofi has a new coat. win win.
I also have a favor to call in if I need to. Barter is alive and well.
I aim on finishing the hats and those socks this week and I have a Penny sweater, a Tin Can Knits pattern, to sew up under the sleeves and weave the ends in.
Then I will pick 2 from the WIP shelf, AKA the shelf of reproachful looks, to work on this month, as well as Francesca,s sweater. I am itching to cast on more socks but am trying to ignore it. I would love to finish 4 WIPs before my Christmas Eve cast on, I dare not even look at patterns for that yet. I might well come down with a bad case of castonitis.
The sewing room is in a slight state of chaos, I have a new freezer coming and that is the only room with space for it. Everything has been shunted around to make space and once it is in Michael will be measuring up for a new shelf. Or three. As I have lost that floor space.
That willl be a nice surprise when he reads it. hehe.
It,s a good job he likes a project.
There is a "new" Michael Palin program on TV tonight, I think that it is basically covering his former programs but I will be having a look.
Now I think it is time for a glass of something red and fruity.
Keep safe.
TTFN                                      Pam
Posted by Pam at 20:27:00