Anything that moves, even slightly and his eagle eyes are on it. Given a smidgen of a chance and he pounces.
The tail end of a cast on row of a sock. Boom he has it.
Curtain tie back tassels. Boom, they have been replaced with smooth wrap round ones.
His absolute favourite lately has been the handles and pull ties on my knitting bags.

I have been inspired by Sandra Paul of the Cherry Heart blog and podcast.
Sandra has just released a PDF pattern for a sock bag that will allow 2 yarn cakes to sit side by side.

Mmmm, I thought I need something of that ilk as I am a recent convert to Toe up, 2 at a time socks.

No drawstring though, Herbie magnets!

No extended zipper for wide open top. Another Herbie attraction.


I know, a fold over bag. I saw a pattern a while ago. I can surely fashion one myself. That one had a big button and a loop, better edit those out.

First find some fabric that has been hanging around waiting for a trial project.
Then decide on some approximate measurements and cut, sew, quilt and form a box bottomed bag. 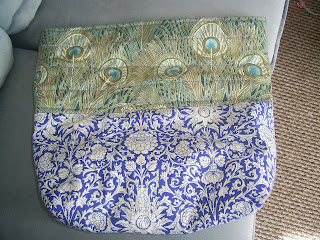 Done, a bit on the large size but that is all to the good. 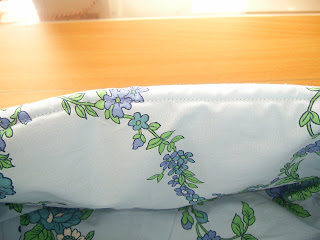 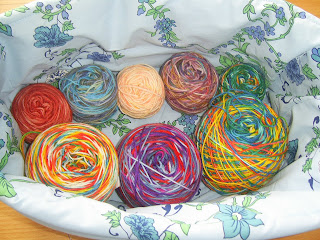 Look, it holds a projects worth of yarn with wriggle room. 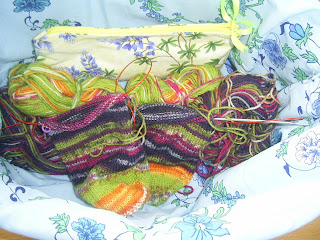 More to the point it holds a pair of scrappy socks and the yarn. Along with my notion pouch, every thing that I need in one place. 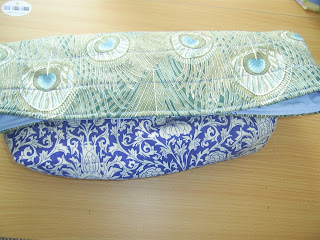 Then when I have finished it just folds down leaving nothing to tempt Herbie. (Fingers crossed).

I will make another, slightly smaller and with more quilting for extra firmness.

Now for the before and after photos. 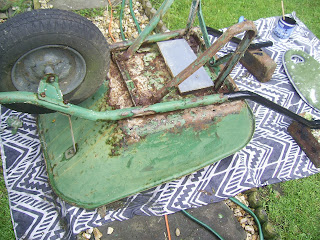 The, more holey than righteous, wheelbarrow. The inside was just as decrepit. 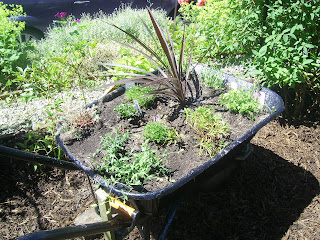 The Alpines are small but I do not want to have to be splitting them any time soon, a couple of years and they will fill out nicely. The Cordyline is in it's own pot in proper compost for it. That too has some growing time before it becomes too big.

There is a triple layer of coated wire netting, for drainage, under a porous membrane beneath the growing medium, which is part John Innes No 2 and part sharp sand.
Later on, when the sun had slipped behind the mountain it had a  mulch of blue slate. Too late for a photo I will take one today.
( I used some of the slate to mulch the Hydrangeas.)

Fingers crossed that it does okay, I do have some Alpines at the back if any casualties occur. 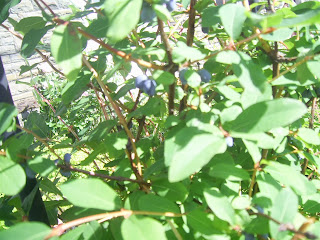 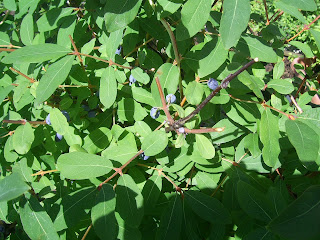 The Honeyberries have been prolific, not a bad thing as the birds go mad for them. 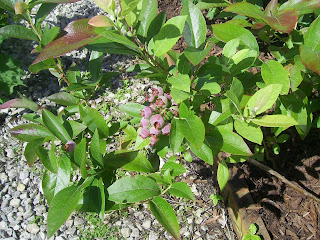 They love the Blueberries as well, I put 2 of each plant in the front garden. It means that I can see the birds from the sewing room and they are safer from the cats that roam through the back gardens. 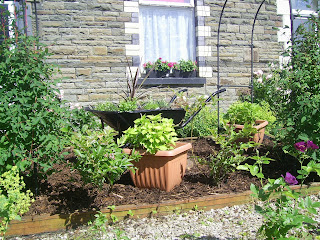 The wheelbarrow in not obtrusive from the road, I will have to move that front planter soon though, once the Hydrangea gets a few flower heads forming it will block the whole thing.

My roses are putting on a marvellous show, they are all scented and the perfume drifts in through the windows.
I may put some honeysuckle on the back of the arches, although I was thinking of planting some maiden whip apples to train over. I could enjoy the blossom and share the fruit with the birds.

It is another sunny morning and I have changed the sofa throws and cushion covers.
Ben and Herbie have had a jaunt round the garden and are ready for a walk. We slept late this morning, possibly because of all the work yesterday.

I better get myself into action, Herbie has just joined me on the sofa and is looking mournfully at me.