I am sure that many of us remember the Bedknobs and Broomsticks spell, Substitutinary Locomotion, where Angela Lansbury  had military relics save the village, if not the country, from invaders.

Funny, entertaining and a regular film in my viewing history, almost ageless.

As you may have gathered, I am a part time vegan, part time vegetarian and full time greedy guts foodie who likes meat, fish and has a not so mild cheese addiction. I love finding new ingredients and recipes then toying with them and eating the results, mostly with pleasure.

However I have never gone down the road of Meat Substitutes. This is mainly because of a bad experience many years ago. We were on holiday on the South Coast and visiting family. After a day out on Hayling Island we were invited back for tea. We were assured that there was more than enough casserole and a few more sprigs of cauli and a couple more carrots would make enough veg.

We accepted gratefully and returned to the house, in due course the meal was served. It smelled a bit "funny" but I assumed that different herbs and seasonings to mine had been used.

The "meat" in the casserole was in fact TVP, in the very early days of this strange product. It was an acquired taste, I did not acquire it, in fact the whole lot left my system PDQ.

I put it down to too much sun in my apologies and we left.

I expect that things have improved greatly since those days.
They must have done as the shops seem to all have fast growing areas devoted to such stuff.
Long gone are the days of the early incarnations of Linda McCartney veggy sausages. Not to mention the strange looking veggy rissoley things.

I saw on a podcast recently that Iceland have launched a vegan burger ", No Bull" that actually oozes red liquid when cut.

Disgustilating, is the only word that comes to mind. Apart from the fact that real burgers should be cooked through what vegan would want to see that?

The podcast that I saw this on is very entertaining and the presenter justified it by saying that newly converted vegans liked to eat familiar looking food.

I beg to disagree. In fact I think that the absolute opposite is truer.

Newly converted anything people are generally brimming over with enthusiasm and preach it from the rooftops.

We all know the new non smoker who bangs on constantly about the dangers/smell/ash etc.

Or the new teetotaller who can quote, verbatim, large chunks of medical articles to support his or her fervour.

I can not imagine that vegans and vegetarians are any different. As a "foodie" I have to force myself not to prattle on about cooking from scratch, shopping wisely and using herbs and spices for added flavour.
Well maybe I fail a bit in that respect, I do run on at times.

I have friends who are vegan, Will and Jess spring to mind along with their lovely daughter Ivy. All three are as healthy as can be and Ivy is a proper active little girl, I only see her still if she is eating!
There are some who are vegetarian, W for instance has been vegetarian for years. They too eat very well and are all brimming over with energy.

I only know one vegan who eats make believe meat, that is simply because she refuses to cook and lives off ready meals alternated with vast homemade dishes of beans/grains/nuts and salad. Her choice, her preference and the dishes that she comes up with are decidedly in the "tasty tasty very very tasty" zone.

I have not aimed at upsetting anyone with this post, I just do not understand why anyone who has given up using any part of any animal would want to eat something that looks like meat.

I did make the Black Banana cake, I had 4 large bananas so made just over double the recipe and made 3 cakes. Before they were completely cold I cut one, Oh My Word, let me blow my own trumpet, it was sooo good. Far too good and utterly moreish. We resisted temptation but the SO did wonder whether we should give one to W, he was only joking. At least I choose to believe that he was. 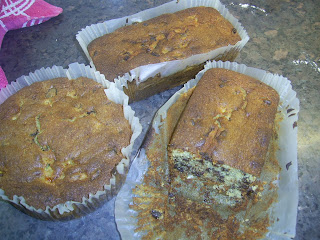 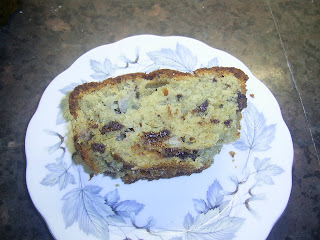 I may have eaten the little corners that fell off before finding the camera.

We settled on Pizza for dinner and in the interest of using the oven to capacity I made 2 loaves as well.
One just basic wholemeal.
One a take on Bara Brith, with lots of cinnamon and mixed dried fruit with some candied peel and a couple of tablespoons of homemade marmalade.
The pictures refused to load. Duh.
These will NOT be cut till completely cold.

I may have hidden the bread knife.

The butter may be hiding in the veg drawer.

Sometimes it has to be done.

Just 2 days ago this tin was full to the brim with my 10 minute cookies. 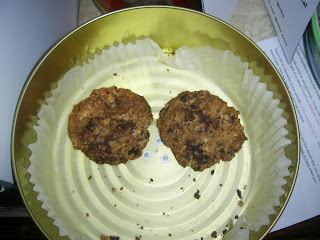 I have eaten one.

The dogs can not open the tin.

The grey skies started to clear late afternoon yesterday and this morning is bright and sunny. Woo Hoo.

A second pair of socks were cast on last night, photo later. 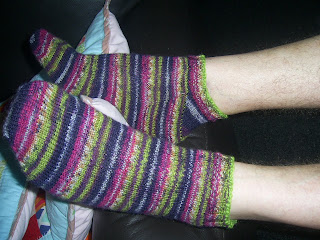 This pair had the ends woven in and scarcely had time to land on the little table that I use when knitting, before they were grabbed and put on.
He has a serious sock addiction.

He is very knitworthy.

I am off now to peg out my washing, deep joy, and then get the dogs out for a walk. First I will need to remove Herbie from his bed. He played most of the evening with various toys and was really tired when we went to bed. Before I was in bed he had snuggled into his and was snoring.