A not quite lost skill.

In the late 60's early 70's I was a prolific knitter of the "Magnus Magnusson" sweater. They were all the rage along with some new fangled (to me at least) circular needles. I mastered stranded knitting/fair isle/colour work/whatever you like to call it with scarcely a second glance. The joys of youth.
My hubby made me a box with 6 compartments and  smooth holes in the lid to keep all the coloured balls apart. I wish that I still had it now.

Then of course it went so far out of fashion that it all but disappeared off the face of the earth. Well it did in rural North Norfolk.
Funnily though I have no memory of the next knitting fad whatsoever. Mind you I was coping with a baby, 2 dogs and a huge farmhouse alongside building a garden out of an acre of wilderness. Oh and I was learning about fruit farming, from the ground up.

Anyway, I posted a very vague picture of a hat with a stitch pattern (barely visible) that I made up on last weeks hospital run. I pulled some scraps of yarn and had another play. The result is a bit sketchy but not too shabby for a prototype. It would have been better if I had not mixed 3 different weights of yarn, but this was about the colour and I used what I had.
I hope that the resulting hat fits Ivy, I will find out later today. 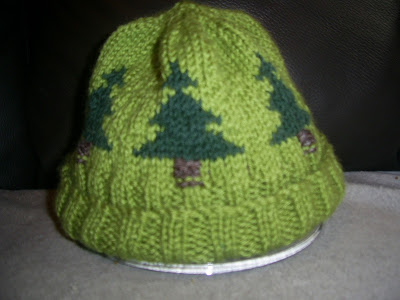 I now want to work out stitch count and get the tension right with the floats. I also hope to use more shades of green and get 2 rows of trees in, for an adult hat. The SO was quite upset when I told him that this one was child sized when he staked his claim upon it.

I am steadily working my way through the last few things on my list of makes for this year. The first ever Mantel scarf that I have made has been delivered to W. He is really pleased with it and I may try to squeeze time to make one for myself.

The snow is still hanging around, we have subzero temperatures here, it is pretty but I will be happy to see it gone.

Talking about seeing something gone, we had home cooked fish and chips last night. All done in the oven, the chips tossed in a scant teaspoon of rape seed oil. But, Oh My Word, the smell in the kitchen when I came down this morning. I had the extractor fan on while cooking and left it running for 30 minutes after AND had the door open BRRRRRR for a few minutes.

I opened the door and chopped up a lemon and boiled it on the stove top, that did the trick. The resulting decision is NO MORE CHIPS at home. My nose still thinks that  the house smells like a chip shop, even my hair after a shower. The SO has checked it out and all it smells of is shampoo.

Now I am going to drink my tea and then get Ben out for his walk.