Tidying away the old year.

My Granny never liked to carry odd jobs over from one year to the next. All the little things, buttons were sewn back on, shelves and drawers sorted out. The laundry was kept up to date, in fact she liked to end the year so that the only dirty laundry was the clothes on our backs,oh and the ironing was the same.

She didn't take it to the extreme of an empty larder, but there were no leftovers in the fridge and no bread or cake in the house.

Just after the new year was rung in a batch of bread would be made, and left, for a slow rise, in the cold larder. Then first thing she would bring it into the warm kitchen, knock it back and shape into loaves and rolls. Warm bread for breakfast with butter and jam, yum.

The cake tins were empty also and a "hasty cake" of bread dough, rolled out and spread with butter and sugar before shaping into a round and proving, would be put into the oven when the bread came out. Then a Victoria Sandwich would go in and finally a pound cake.

The mending basket was emptied out and everything had to be mended before the last meal of the old year. Any knitting or sewing that could be finished was and the rest was put out of sight. There was no New Years Eve cast on then, it hadn't even become an idea in those days.

My Grandfather was a tall, dark haired man and "first footed" as many homes as he could between the strikes of midnight and 1:00 am. he carried a piece of bread and a small lump of coal to every home. This was to ensure that there would be food and heat for the coming year in each home.

Today we have started to tidy this year away, the decorations are gone from most of the house, there is just Francesca's room to be de-Christmased.

The laundry is just about up to date, just a few things that will be hand washed tomorrow, and our clothes from today which will make a load for the machine in the morning.

Some of Ben,s towels were getting a bit worse for wear, a few of the sides were fraying so they went through the overlocker. 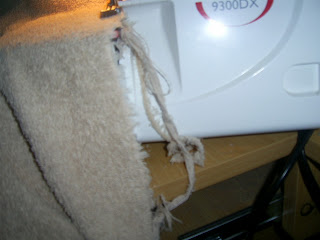 All are neat and tidy again.
While I was at it I pulled out 3 white bath sheets that were not being used. They were from an old set and had worn a bit too thin, they have been cut up, sailed through the overlocker and are now a lovely stack of cleaning cloths and hand towels for the kitchen. The old ones are now general cleaning cloths, and the old cleaning cloths have gone into the "rag bag" for the SO to use when he is decorating and so on. That bag was getting very low as he has been quite busy this year, and after a while they just get too bad to go into the washing machine.

I see packs of  cleaning cloths in the shops and they seem small and flimsy, the sort that if they do not fall apart with washing,shrink up to postage stamp size.

There was some roast pork left, that has been sliced up and will become part of a Singapore Spiced Noodle dish for dinner. I sliced and diced up 2 sticks of celery, a couple of chunks of pepper a lonely carrot and half a red onion that were rattling around the veg drawer, these will all go into the meal.

There are still some bits of veg in there and I will be making a meal out of them tomorrow.

I will do my normal shopping run to Tesco at 2:00 tomorrow afternoon, just in time for the final yellow sticker mark down. This will kick start my meal plan for the first week of 2018, I simply plan dishes around any bargains that I find. failing that I will buy
the essentials and go freezer diving and larder surfing.

Now it is almost time to start dinner, early tonight as we have been busy all day and there is a certain amount of rumblies in the tumblies going on.

PS. Did any one watch the 3 part Little Women adaptation. Why on earth did they try to squeeze Young Wives and Jo's Boy,s into the last half of the 3rd episode. Up till that point I was looking forward to another 1 if not 2 mini series.

I did watch The Dark Tower on Netflix and will now be unearthing the books ready to read them. The SO has everything that Stephen King has ever written.

Francesca brought us some paperbacks to read, written by Linwood Barclay, and I am hooked.