Me Made May Day 5


Almost human today.
I hate being ill, it always seems to happen just as I have a list of things that I WANT to do, never when the list is NEED to do.
Another case of "Murphy,s Law" I suppose.
Anyway I have abandoned the PJ's and today am wearing a dress made from a self drafted pattern. It did start as a Frankensised mix of 2 bought patterns, but it has been modified so much that you can not see any of the originals in it.
The fabric, just like the PJ's, came from the Fabric Guild and was very, very bargainicious. It is cream with a tiny black dot, I bought about 12 metres in 2 separate orders and now wish that I had bought double. It has backed a quilt, bound another 2 and featured in many makes. I do still have some fairly large scraps and every piece will be used. 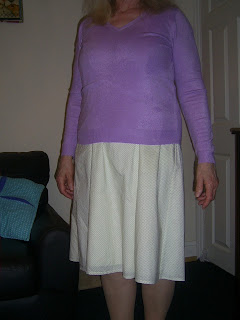 The jumper came from BHS before I moved to Wales, it is paler than the photo and goes with many of my me made clothes.
I do miss BHS, I used to drive to Norwich from Diss, and later from South Lincs, just to shop in the store. It was slap bang in the middle of the city, a short walk from Castle, Market and the almost as good C&A. There was also a Littlewoods, M&S and a wonderful Woolworths with a cafeteria on a Mezzanine floor. I spent many a wet Saturday ( as a teenager) in Woolies, listening to the top ten singles in the record booths, eating in the cafe and leaning on the Mezzanine rail people watching. There were hot roasted peanuts and cashews, if you were flush, and lots of things to "window shop from the inside" over.
When the sun shone we used to eat hot peas with mint sauce or chips with tomato sauce on the market. watching the stall holders was good free entertainment, the crockery sellers would arrange a dinner service on a tray and then flick the tray so the china jumped into the air. I never saw so much as a near miss never mind any breakages.
When that palled we would walk up to Chapelfield gardens and generally muck about, burning off some energy before heading to the ABC or the Odeon to watch the latest film. The Odeon was quite a walk but we knew all the shortcuts, there was one through a garden that we would take if the car was not in the drive. The back of the house opened onto a different road and saved us about 10 minutes walking.
After the film it would be a rush to get home for tea and then with any luck I had a babysitting job that would give me the money for the next Saturday,s adventures.
Life was so simple then, I felt safe walking through the city on my own at any time of day or night. Now I would not venture into most of it on my own at midday.

Ooh would you look at the time, my meander down memory lane has made me all behind. (or would that be too much cake?).