What does it take to get you working on a new project?
Some people use the words process or product, I don't think that I fall into any of them completely.
If someone tries to push me into something I dig my heels in and turn off my cooperate button.
If someone tries a "bribe" then I do much the same.
I do love the process of all my crafting, even the things that go wrong are all part of the learning curve.
Equally I love having the finished product in my hands, even if it is going on to someone else as a gift.

The socks that I cast on yesterday are just flying off the needles, I have turned the heels and will be starting the ribbing this evening. Yes they will be cast off tonight.
Everything fell together, the yarn is a dream to knit with. The stocking stitch is mindless so I knitted through both this weeks episodes of Silent Witness at a spanking pace. It was a bit on edge BUT I did have the culprit pegged as a wrong 'un from the beginning.
Also I am itching to cast on Francesca's jumper, it will be top down with raglan sleeves. I just have to figure out how to do the cast on as I will use all the remaining yarn on the cowl neck. I am not keen on using the provisional cast on. I was thinking of casting on with a different colour and putting a row of white in just as you do for an afterthought heel. I think that it would give me a firmer edge to knit down from and it is so simple to pick up the live stitches.

Now for the bread. I have seen umpteen videos on so called Artisan no knead bread, most involve a Dutch Oven and heating the oven for a ridiculously long time. Not to mention having to put the dough in a warm place for around 18 hours.
No can do, my heating goes off at night and I do not have an airing cupboard. Plus I do not want a round loaf, I want a tin shaped loaf so slices will fit in the toaster.
Then the other day I saw a Jenny can Cook video for her no rise bread rolls, sit in the kitchen for 2 hours, shape and rise for 30 minutes then bake. That's more like it. But I want a loaf.
I made the rolls, the SO love them, I thought that they were okay but the crust was too hard.

A bit of "Winnie the Pooh" time

Can you hear the cogs turning?

Bingo, I thought, I measured out the flour 3 cups white and 2 cups wholemeal into a bowl. Stirred in 1/2 tsp instant yeast, 1 tsp of salt and once mixed I used the handle of a wooden spoon to mix in 3 cups of tap hot water. Cover with a lid, I used bowl that has a snap on lid. Stuck on the kitchen table with a towel over and left it alone.
Some time later I had a look and it had doubled in size. Hmm, now what to do? I erred on the side of caution and lightly oiled 2 x 1 lb loaf tins, divided the dough, very sticky, and literally dumped it into the tins, a tea towel over the top and back on the table.
It was about 5.00 by then and the oven was going on for dinner in 30 minutes. That raised the temperature in the kitchen and the loaves rose almost visibly, the second that the sausages and chips came out I slid a baking tray of water onto the bottom shelf and turned the heat up to 200f. By the time that dinner was on the plates the oven was at temperature so in went the loaves for 30- 35 minutes. 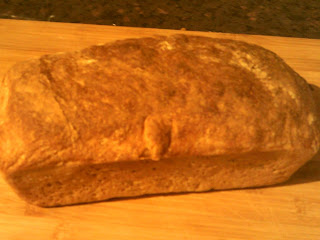 Sorry about the yellow tone, no idea why. This is what they looked like out of the tin. 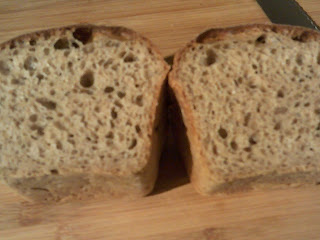 Cut in half, you can see the open texture, sourdough meets ciabatta.

I wonder where the yellow went? 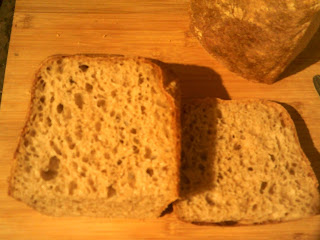 There it is. The slices show that the holes are pretty uniform, and the texture is fine.
The crumb was a bit on the wet side, I will have to play with temperature and times.
The slices took longer to toast because of the moisture content but were delicious.

I will be carrying on for another batch or two. Next time I will make double and use 2 x 2 lb tins, I will adjust the temperature and cook a bit longer. I do like my usual bread from the bread maker but a change is good. I love sourdough but it is time consuming and ciabatta does not make a proper loaf for toasting. I like a good firm crumb with a thick but soft crust.

I may try putting the dough in the fridge for 12 hours for an initial slow rise, that should increase the flavour without adding any further work or attention on my part. Lazy wins the day.

It will not be for a few days though as we have a guest coming to stay.
He is a real gentleman and has been several times, yes it is Rufus. He is the perfect guest, he eats what he is given without complaint, he does not talk over whatever we are watching or listening to and he never, never makes a mess. With one exception, just like Herbie and Ben he can not have a bone without leaving crumbs on the floor. That is no problem though, What Herbie does not hoover up the vacuum cleaner does.

On that slightly insalubrious note I am off in search of some lunch and pull the making of dinner together. having peered into the depths of the fridges I think it wall be medley of leftovers. Then tomorrow we can have Iffits, or perhaps a me made ready meal from the freezer.