Toasty toes and what day is it?

I am so pleased that many of you liked the little slippers, the heel can be an issue. When I sew the seam up I start at the ankle and stitch down to about 2 garter ridges from the bottom, then I press that seam out into an inverted t shape. T. Then I just stitch across the bottom. I intend to try a pair toe up, Judy,s magic cast on 8 stitches on each needle (magic loop) then increase up to 40. Knit in the round to the right length and then knit flat for the 32 rows and kitchener the heel. I also thought that if I increase steadily on each side to about 60 stitches it would give me a sort of shawl collar. I have a pair in Aran yarn on the needles, fewer stitches though, so I will let you know later.

I did make a little pair of short socks in the Aran yarn, 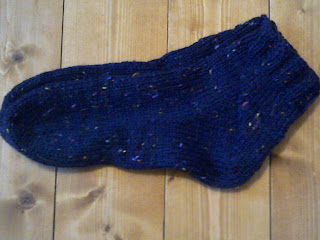 I used Judy,s cast on, 10 on each needle and increased to 20 on each. I knitted the sock as normal, Fleegle Heel and then a few rows of SS and 2 by 2 rib. I tried it on and it is a bit loose for me so I pulled the top in with a tighter cast off. They are fine over my thick tights and in my walking boots. The new cast on was 8 on each needle and I have increased to 16. I will knit a couple more rounds and then try them on for size, I do not mind tinking back and doing another 2 increases if I need to.
These were going to be socks BUT in the interest of exploring I will try the modifications that I mentioned above on the slipper socks. about 2 rows before I need to divide I will add in enough stitches to bring them up to 40. Then I will try the shawl collar idea, if it does not work it will be seconds to frog it out and try something else.
Lots of play time with these.

Talking about play time. We have not been eating puddings or cake for a few weeks but yesterday I dug 2 huge apples out of the fridge, they had just started to wrinkle. Peeled and sliced fairly fine they went with some mincemeat under an oaty crumble.
while the oven was on I made 2 huge Yorkshire Puddings, steamed some cabbage and heated up the beef casserole.

Those of a nervous disposition may want to look away. 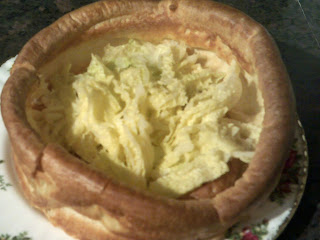 As you can see they filled the plates, a generous layer of cabbage, Savoy is my second favourite after January King. 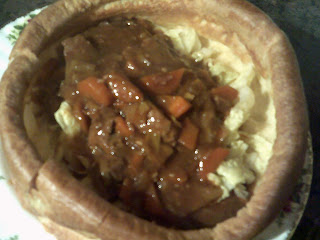 Topped with a ladle full of casserole, oh yum.

I have to 'fess up that I could not eat it all. Nothing was wasted though as Ben would dig to Australia for Yorkshire Pudding. I cut up my leavings and he will have a little treat for the next few days. I can tell you that his breakfast disappeared at a rate of knots this morning.

we changed our coffee yesterday, from the French to an Italian blend. The first pot was a bit too weak so this morning the SO put an extra half scoop in, it is lovely although a touch more bitter than the French.
I am loving the French Press and we have started to make a brew after dinner. However in the morning there is not enough for 2 mugs each so... I am looking at filter machines. Space is as always at a premium so size will matter. I would love a Bean to Cup type but they just take up too much space. I also have the rule of 1 in, at least 1 out, mmmmm, some serious thinking to be done. I do have a "freebee" though as a few weeks ago the SO broke the Old Country Roses coffee pot while washing up. If I use that I have already done the 1 out.

That wont wash, I replaced it with the French Press. Or Did I? I had a smaller Press that went to the CS. Woo Hoo, I will call that the 1 in and 1 out so I am back to having a space to fill.

Apart from size my only requirement is that it comes with a reusable filter, no plastic/paper single use hybrids here.

Rufus goes back home today, he will leave a gap, he slots right into our life routines as though he lives here. it is good that I see him every morning for a walk and he comes round for play times in the afternoons some days. It is good for him as well as  Herbie and Ben.
I think that is it for today, the sun is shining and the sky is blue. The washing machine is on the final spin so I will be pegging out soon.
I do not like to do laundry on a Sunday but when I got up this morning my mind went into fast forward and I was convinced that it was Wednesday. Nothing about having Rufus at my side caused me to second guess so on the machine went. it was not till about an hour later that the penny dropped.