At last, a full day in the garden, most of the work in the front garden is complete, just the original middle bed to be cleared and more soil added to raise the level. Then it will be a waiting game for my bare root roses and ground cover perennials in October, not forgetting the bulbs that I will be putting in. I will also put some primulas and winter pansies in. 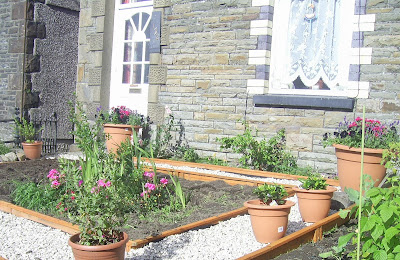 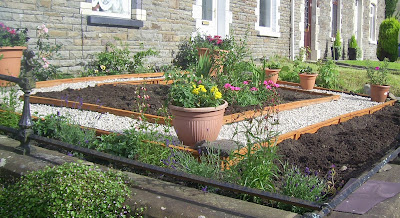 The edging has been capped, the turf has gone and soil has been added to most of the central bed. It is beginning to look like the picture in my head. 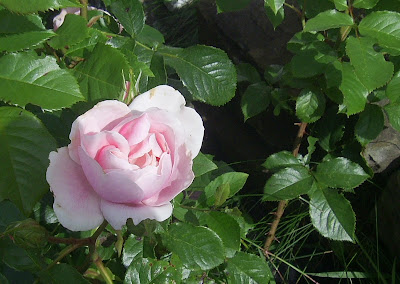 These roses were here when I moved in, they are scented and although old have responded to pruning and feeding. 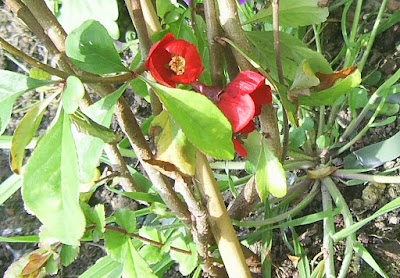 There are still some flowers on my Quince, and some weeds there too, tut tut. 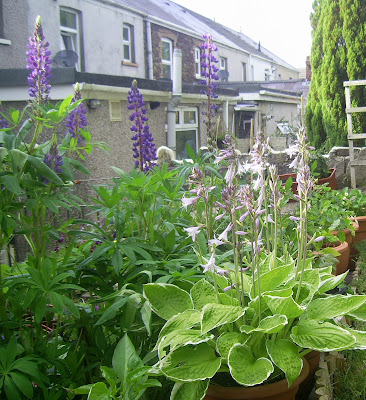 The Hostas are looking good, I do intend to find a few more. I have never had them before and am so pleased that I kept them in the back garden where there are very few slugs, and none of the large black Keeled ones. 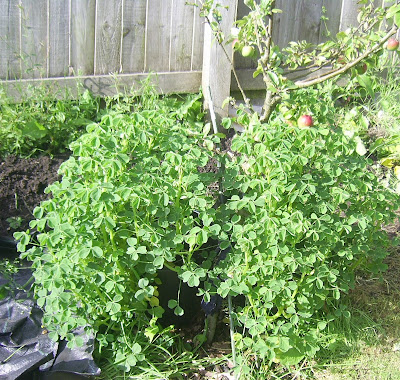 These are just 2 of the Oca's that Dawn from Doing it for ourselves in Wales gave me. There are 2 that have remained quite small but the rest have filled their pots, I am hoping for a reasonable harvest. I will be growing theses again next year. 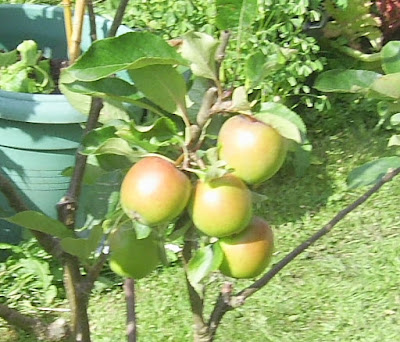 The apples are looking very good, I have taken more than half the fruit off after the June drop as I did not want to put too much strain on the trees, this is their first year out of pots.

Next week I hope to get the timber for 3 raised beds for the back garden, they will be for veg, the fruit will go directly into the ground. I have put in 2 Rhubarb today and have Gooseberry, Blackcurrant, Jostaberry and Honeyberry in pots ready for planting later in the year. I also have some small Rhubarb plants that I grew from seed, I am as pleased with those as I am with the rest of the garden put together. I have never seen the seed before and just tried it as an experiment, I have 8  and gave 6 away, I will have to remember to take a photo.

My neighbour has finally started work on the jungle, he has cut a load of undergrowth down and had a bonfire. I am so pleased, he is going to remove the Holly stump and has offered to help me clear the straggly Hawthorn at the top of my garden.

It is supposed to rain again tomorrow, if so I will be finishing the sewing room tidy up, and the ironing.
Now it is time for a brew.